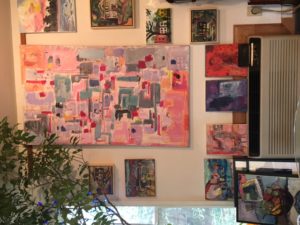 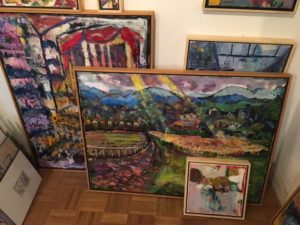 Polychromatic pigments seem to flow from Cynthia Erdahl’s mind through her fingers and onto canvas, paper — really whatever surface she can find. “Color, Color, Everywhere!” could almost be a mantra for this artist who came to her calling by a circuitous route.

After years of city case work in foster care and building a counseling practice, Cynthia, who has a Master’s Degree in Social Work, decided to strike out on her own and start an independent practice. “In order to market myself better, I started going to Toastmasters as a way of developing my public speaking.  It was great and led to many opportunities!”

One of her first discoveries was that she was good at it — enjoying the people that she met and the spotlight so much that she began entertaining the idea of appearing on stage. In one of her first plays, Cynthia was featured in a  comedy, where she portrayed a glamorous 1950’s housewife/beauty pageant contestant. Bitten by the acting bug, she kept on tripping the footlights, in addition to keeping her business going. 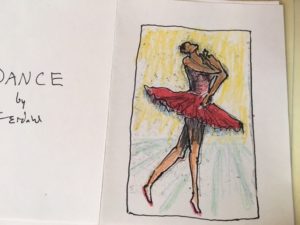 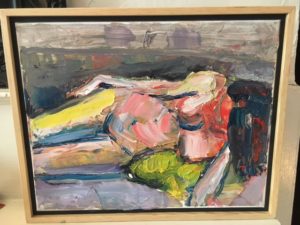 One day she idly did a drawing of the beach and later showed it to a friend who was blown away. Her friend, a fellow creative, saw Cynthia’s talent right away. “She told me I needed to do more art. So, I did some pen and ink drawings of places around Richmond and had them made into cards, and started going to shops to see if they would carry them.” Sure enough, the cards were a hit! So, Cynthia moved out to other markets such as Nags head, Ocracoke, Wrightsville Beach, Fredericksburg, DC. and met with success at every turn. 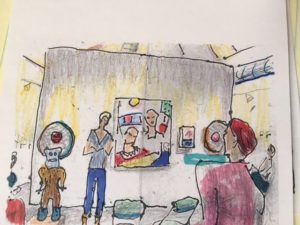 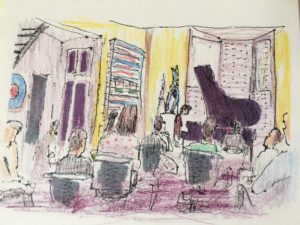 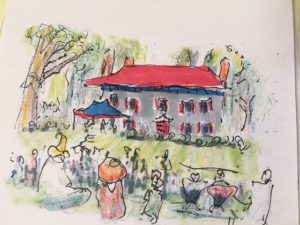 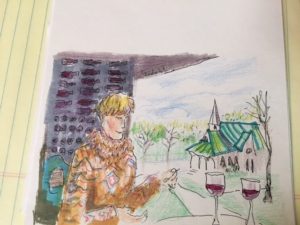 I remember, when I first met Cynthia in a painting group. “Success in Making and Selling Art,” was an often-discussed topic, because each of us wanted to pursue that end in some way.  This was many years ago and at that point, though Cynthia was relatively “new to the game,” she had already garnered excellent experience.  She passed on some very good advice,  “Just have a pad and pen with you at all times and draw everything you see. Draw everything that interests you.” That and DON’T GIVE UP. 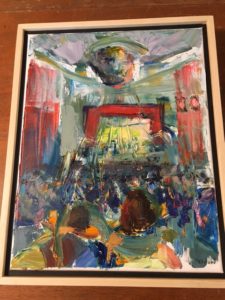 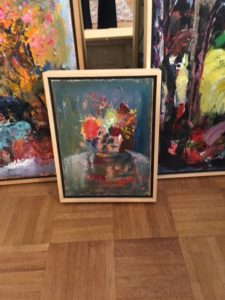 Simple, yes? Cynthia has done that and more. Her ability to find markets for her work, excellent classes from myriad artists and teachers, as well as opportunities to show and sell is phenomenal. How does she do this? Devotion to creativity and to her art, and an open mind about her style and media. Staying FRESH. It’s pretty darn impressive when you think about someone who had no prior training or inkling and, now, keeps at it, constantly creating new art. 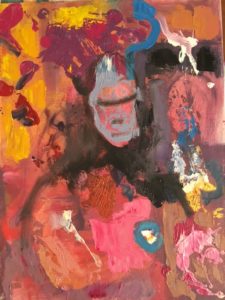 So, she has shown internationally numerous times in the “Artificium of Humanitas” East meets West Show,” held in the United States and South Korea. Other opportunities were in China and Uzbekistan. In Richmond she has shown at artspace gallery, Artemis Gallery, “The V Tashkent Biennale: Results and Reflections,” Quirk Gallery and many,many other places.

Still toiling away in her studio, her latest show, “Revive” on May 4 in Richmond, at Hummel Associates, 223 North 1st Street, Richmond, Virginia, will feature a range of her work in differing styles, abstract to (quasi) representational. The pieces may wander the map in terms of style, but each is filled with an essential delight, a celebration of life that makes you think, and feel happy, and…… of course, there’s “Color,Color, Everywhere!” Here’s to persistence and painting the world in a panoramic palate! 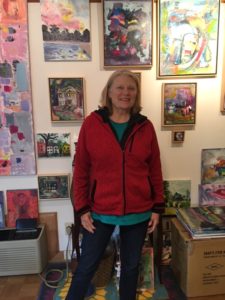 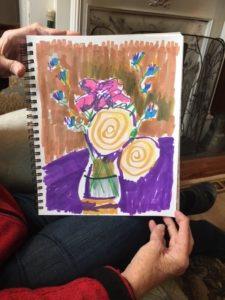